Strasbourg, July 4th 2012 – The European Parliament rejected ACTA1 by a huge majority, killing it for good. This is a major victory for the multitude of connected citizens and organizations who worked hard for years, but also a great hope on a global scale for a better democracy. On the ruins of ACTA we must now build a positive copyright reform2, taking into account our rights instead of attacking them. The ACTA victory must resonate as a wake up call for lawmakers: Fundamental freedoms as well as the free and open Internet must prevail over private interests.

Citizens from the Internet and all around the world have won! By 478 to 0393 during the final vote, Members of the EU Parliament killed ACTA once and for all. Together –connected through a decentralized communication architecture– we defeated this evil treaty negotiated in secret by a club of private interests and dogmatic civil servants. The ACTA battle demonstrates how crucial our networked public sphere is to the future of our societies and democracies. 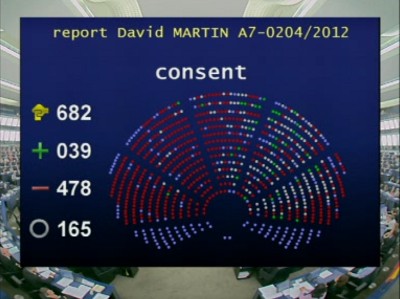 Philippe Aigrain, co-founder and strategy adviser for La Quadrature du Net declared: “European institutions must now recognize that the alliance between citizens, civil society organizations and the EU Parliament is at the core of a new democratic era in Europe. European copyright policy must now be built with the participation of citizens.”

La Quadrature du Net warmly thanks and deeply congratulates every citizen, organization, cluster and network who collectively achieved this major victory! Let's all celebrate and learn from this success, so as to be even stronger for the next battles!

“Beyond ACTA, we must stop this repressive trend which keeps imposing measures that harm the Internet and fundamental freedoms. Citizens must demand a reform of copyright which will foster online cultural practices such as sharing and remixing, instead of endlessly repressing them. The ACTA victory must be the beginning of a new era, in which policy-makers put freedoms and the open Internet –our common good– ahead of private interests.” concluded Jérémie Zimmermann, spokesperson for the citizen advocacy group.