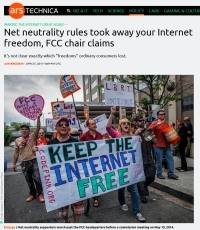 Did you feel a sudden loss of Internet freedom in February 2015 ? That's when the Federal Communications Commission imposed net neutrality rules that prevent Internet service providers from discriminating against websites and other online services. And that's when Americans lost their Internet freedom—according to the current FCC chairman, Ajit Pai.

Pai, a Republican and former Verizon lawyer, opposed the net neutrality rules when Democrats held the commission's majority, and he quickly got to work dismantling the rules after being appointed chair by President Donald Trump. To convince the public that the FCC should eliminate rules it passed two years ago, Pai's office yesterday issued a press release titled, "Restoring Internet freedom for all Americans." [...]

But consumer advocacy groups and Web companies urged the FCC to preserve net neutrality rules, saying they are crucial for giving online businesses access to customers and for letting Internet customers use the applications and websites of their choice. Advocacy group Free Press published an updated list of incidents in which ISPs interfered with Internet content in the years before Title II net neutrality rules were implemented. [...]