Paris, 20 May 2015 — Governments of the EU intends to crush the rights and freedoms of citizens in order to reach an agreement on roaming1, thus undermining competition and innovation in the digital economy, according to a leaked document. This documents reveals an unacceptable disregard on the part of Member States for the commitment of the EU Parliament and many EU citizens to uphold the principle of Net neutrality.

For more than two years hard negotiations have been conducted within European institutions regarding the regulation proposal on telecommunications, which now contains two main chapters, one on roaming and the other on Net Neutrality. In 2014, a lot of work was done by citizen organisations to ensure that the European Parliament would protect Net Neutrality and uphold the rights of citizens to access a non-discriminatory, guaranteed access to a neutral and transparent Internet networks.

La Quadrature du Net has already expressed its concerns on several occasions on the direction given to the text by the Council of the EU, because it removed any reference to Net Neutrality and proposed traffic management measures deeply prejudicial to the freedom of communication and innovation. As we move closer toward the end of the negotiations on this regulation, and despite the European Parliament efforts to find an acceptable compromise, the document leaked by Contexte from the EU Council shows the text is geared toward reinforcing the already dominant position of big telecom operators, turning them into the Internet's gatekeepers. The Council has is using Net Neutrality as a bargaining chip to get a compromise on roaming, perceived as more consensual, allegedly easier to understand and more marketable to voters.

It is unacceptable that the Council, including the Latvian presidency, sweeps away positions of the European Parliament. It is unacceptable that the Council makes the play of big economic operators to the detriment of citizens and small SMEs. The European Union has now the opportunity to reaffirm its Human Rights values but if the Council do not seize this opportunity, the EU will be lagging behind the USA since the FCC has just enshrined the Internet as "common goods", and empowered FCC, the US regulator of communications, for enforcing Net Neutrality in the US. 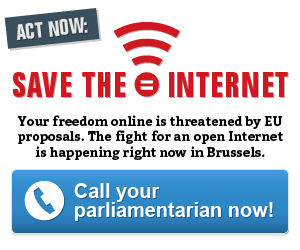 We call on the Council to respect the fundamental rights and reconsider its position by adopting the reasonable proposals of the European Parliament.

We urge the European Parliament not to yield to strong pressure from the Member States and powerful industrial lobbies.

We call on the European Commission to move in the direction of respect of citizens' rights and freedoms in the negotiation of this text and to echo the proposals of the European Parliament.

It is fundamental and urgent to act before the next trialogue planned on 2nd June. A campaign is ongoing in all the EU Countries in order to preserve our right to use an Internet based on principles of non-discrimination and liberty.
We call on the citizens to contact their representatives in the European Parliament and urge them to safeguard Net Neutrality.