Paris, 21 April 2015 — A significant choice looms ahead of us: will we let establish societies of surveillance and mass suspicion will we build societies of freedom, collaboration and sharing? To face these historical challenges and thanks to the +6 000 supporters who donated in late 2014, La Quadrature du Net is renewing its team and getting stronger.

As in any organization, people see changes in their lives and this brings about changes in our team. La Quadrature du Net has always always risen to these challenges and used them to come up with new possibilities. This was the case a little over a year ago, for example, when Jérémie Zimmermann quit his role as coordinator but continued to help on a volunteer-basis as part of the Strategic Orientation Committee. Now, this is once again the case as three active members of our operational team are leaving or have left, letting three new arrivals follow in their steps. 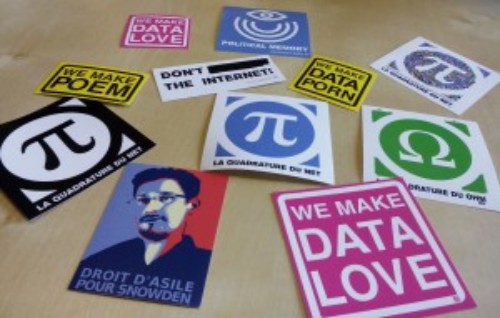 Yoann Spicher, campaign coordinator for years alongside Jérémie Zimmermann, helped with the transformative changes of the year 2014 before embarking on a doctoral thesis last Autumn. His enormous work remains highly valuable to us every day. Christopher Talib, who has a degree in social and political sciences and a strong interest in campaigning tools and working with volunteers, joined La Quadrature du Net at the end of last August. He is in charge of the daily organizational work on campaigns and volunteer activities.

Miriam Artino, legal and political analysis coordinator with La Quadrature du Net since April 2013, left the operational team at the end of March after giving birth to (we hope) a future civil liberties activist. We want to extend a huge thank you to her for her excellent work over almost two years in the team, and particularly her essential role in the adoption of an historical text for Net neutrality in April 2014 in the European Parliament (which governments today are attempting to dismantle). Agnès de Cornulier arrived on April 7 to pick up Miriam's work and breathe new life into La Quadrature du Net's European work, which suffered somewhat from the French emergencies. Agnès studied history, European studies, as well as IT law. After a decade spent in several consulting firms, having worked notably in official development assistance, including for IT, she now joins La Quadrature du Net whose values she has shared for many years.

Marie Walrafen, logistics and administrative coordinator, finished her contract at the end of February 2015. After two years spent taking care of the day-to-day life at La Quadrature, she will now concentrate on her personal projects. Her warmth was appreciated by everyone, from the COS to volunteers and the permanent staff, and helped vastly during the structuring changes La Quadrature experienced in the recent past. We are in the process of recruiting someone in charge of accounting, logistics and administration, matters that are becoming more and more critical as we grow. But some of Marie's other tasks will need to be shared by all so we can ensure La Quadrature du Net remains capable of being and having fun, even when facing the worst.

We also have the pleasure to welcome Arnaud Fabre, who has started a 6-month internship with us. A student of engineering school Telecom Bretagne, he is working mainly on improving Memopol (a political tracking tool critical to La Quadrature du Net), but with his technical skills he will also be helping on various other projects as as well as campaigns.

Last year's reinforcement of the Strategic Orientation Committee (Board of Directors in our bylaws) considerably extended our range of action. But this evolution has been incomplete, partly because we haven't known how best to use all of our members' abilities, especially those of Laurence Vandewalle, whose experience with European struggles is especially valuable. We are in the course of fixing the technical obstacles which prevented her from participating as much as she would have wanted to our actions. On the other hand Jean Cattan, who joined the Strategic Orientation Committee in March 2014, had to leave the Committee last fall to avoid conflicts of interest with his professional life. Although his knowledge of Telecommunications and personal data laws is precious and will be missed, we wish him success and happiness! We will soon announce the arrival of new members.

Another big change in the daily life of the association: we moved to new offices at the end of February 2015. The lease on the premises we hade been renting since 2012 (nicknamed the “Garage” in reference to then Minister of Culture Christine Albanel's attacks (fr) during the Hadopi campaign) having reached its end, Laurent Chemla (member of the COS) offered to rent us an apartment of his at a very interesting rate, considering our limited finances. This generous gesture gives us much better work, and hospitality, conditions. We are now located at the 60 rue des Orteaux in the 20th arrondissment of Paris, where volunteers and friends will be as warmly welcomed as before. The press conference (fr) against the French Surveillance Bill we held with many other organisations a few weeks ago showed indeed how useful this new office can be to our work.

La Quadrature's 2014 financial support campaigns were difficult to conduct: disappointing in June, slow to start in November, we had to publicly voice our strong concerns about the sustainability of the association in mid-December 2014. The wonderful outpour of support that followed our call for help saved La Quadrature du Net financial needs for 2015. We chose to encourage regular donations to allow us to see further ahead and to better anticipate the various actions to be taken. We hope that our supports will remain loyal and will allow us to continue our action and we would like to take this opportunity to extend once more our immense gratitude to all donors. As promised, we are publishing today our financial statements (fr) for the year 2014.

La Quadrature du Net is, at its heart, a citizen association. Help, both on a one-off and on a regular basis, from volunteers and supporters, is essential and at the heart of our actions. We thank and encourage everyone who took part at any level whatsoever in our action in the past year. Please know that we are extremely grateful for your energy and your convictions We encourage anyone who would like to take part in La Quadrature du Net's action to get in touch and join us.