Paris, 30 August 2013 — For the past 3 years, a consortium led by Alcatel-Lucent has been working on technical, business and legal aspects of a plan that would effectively put an end to the free and open Internet we enjoy today. Under the guise of protecting Net neutrality, EU Commissioner Neelie Kroes is about to give these big telecom companies a EU-wide legal shield to achieve their power-grab on the Internet economy, as confirmed by a new leaked EU Commission document. Such a shocking instance of corporate policy capture would have disastrous effects for freedom and innovation online.

Last month, La Quadrature du Net and several advocacy groups slammed the Commission's draft proposal on the reform of the EU telecom market, showing how it aims at killing Net neutrality under the guise of defending it1. The proposal would also let operators establish data-caps, breaking away from the unlimited access offers many European citizens enjoy today2.

As we pointed out, by allowing anti-Net neutrality priorization, the Commission would thereby be giving in to the telecoms lobby's long-lasting demand to enter into business deals with big content providers such as Google, Facebook or traditional broadcasters to prioritise their data flows over the Internet3. Through such a corporate power-grab, this plan would relegate the rest of citizens and new-entrant innovators to a slower Internet, undermining competition, innovation, and the open platform of communication called the Internet.

While Commissioner Neelie Kroes and her staff have arrogantly dismissed these criticisms, a comparison between the draft regulation and the ETICS consortium documents4 shows that they were exactly to the point. These documents help explain why Neelie Kroes — who not long ago used to condemn commercially-motivated traffic discrimination5 — has become such an ardent defendant of the short-term business interests of dominant telecom operators.

Three years ago, under the ironic name of ETICS (for "Economics and Technologies for Inter-Carrier Services"), a consortium started working on the technical, business and legal aspects of so-called "Assured Service Quality" (or "ASQ"), another name for "traffic proritization". 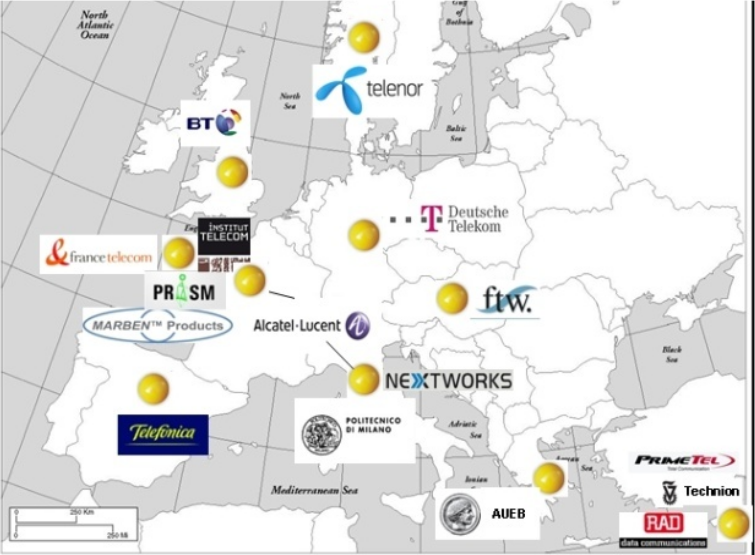 Led by the telecom equipment company Alcatel-Lucent, ETICS was comprised of dominant telecom operators (BT, Deutsche Telekom, Orange, Telefonica, Telenor), but also research institutions (Politecnico di Milano, Institut Telecom, Université de Versailles, University of Stuttgart). EU taxpayers will also be interested in knowing that most of the project's budget came from an 8-million-euro public subsidy from the European Union, under a research program on "Future Networks"6.

The ETICS project concluded in June 2013 by issuing its last deliverables. Among many false assumptions, the ETICS documents claim that "current Internet funding and management rules may have reached their limit", and that traffic prioritization on the Internet is the only way for operators to invest in faster networks. Meanwhile, they grossly ignore or misrepresent the arguments of Net neutrality advocates7. But in spite (or because) of all their biases, these documents help to shed a new light on much of the the EU policy debate on Net neutrality of the past three years.

Looking at the ETICS document, it becomes absolutely clear that Neelie Kroes' anti-Net neutrality stance has been directly aimed at paving the way for the regulatory framework called for by the consortium.

[Note: the corrections in the following paragraph have been made shortly after publication, in response to Neelie Kroes' spokesperson criticisms -- we apologize for these inaccuracies].

At the beginning of her mandate, during her confirmation hearing at the EU Parliament, Neelie Kroes made a statement against commercially-motivated anti-Net neutrality practices. But a few months later, the first ETICS workshop took place, and in 2011, Kroes started convening so-called "CEO-roundtables" to gather ideas on "boosting investment in high speed broadband networks". Of course, civil society, researchers and the many citizen organizations providing flexible and affordable Internet access across Europe remained out of the picture. Meanwhile, the most important members of the ETICS consortium were represented at these gatherings8.

Since then, Kroes has constantly sided with the telecom lobby on the fundamental question of Net neutrality9. For instance, in the Fall of 2012, the Brussels-based lobby of dominant telecom operators, ETNO, proposed amendments to the founding treaty of the International Telecoms Union (ITU) that would have imposed “differentiated Quality of Service” (i.e. prioritization) on the Internet worldwide10. It was an attempt at imposing on the international scale the anti-Net neutrality business models pushed by big EU telcos. Neelie Kroes remained silent, in spite of the criticisms of advocacy groups and other stakeholders: it was clear that ETNO had her tacit support. Such support became more explicit last January, after the ETNO proposals were rejected at the ITU, when Kroes wrote in an Op-Ed that she supported a fragmented Internet, whereby operators could give priority to specific online services at the expense of all other Internet users.

Looking at the ETICS document, it is clear that the ETNO ITU proposals were modeled on the recommendations of the consortium. And now, Kroes is pushing for the same exact regulatory framework that would allow the ETICS consortium to develop business practices that will end Net neutrality and severely undermine the open platform of expression and innovation that is the Internet.

Not only does the proposed article 20 of the draft regulation recognize the operators' "freedom" to prioritize11, the text also creates the perfect regulatory framework for "Assured Service Quality", which precisely accommodates the product and business models that the consortium spent three years working on12. But there is more. ETICS' research on current regulatory frameworks suggested that existing or future national Net neutrality rules could prevent them from launching ASQ-based services. And so in its proposal, the EU Commission carved out a EU-wide loophole banning NRA from enforcing "real" Net neutrality13.

Net neutrality advocates, La Quadrature included, have argued that "guaranteed" Quality of Service for existing Internet services and applications (as opposed to the traditional best-effort delivery model) could be acceptable under three main conditions14:

However, that is not something ETNO or ETICS is interested in. To be sure, big telcos want to be able to act as an oligopoly, picking the winners of the Internet economy by deciding who is able to benefit from guaranteed QoS, monetizing prioritized access to their subscribers to the highest-bedding online services (e.g. Google, Facebook or media corporations). After all, there would be big money to be made for an ETICS cartel: according to the document, ASQ-based video communications could make up as much as 73% of all Internet video traffic within five years; it also forecasts that ETICS partners could be able to grab 25% of Skype's revenues.

The draft regulation, as well as Neelie Kroes' repeated statements and refusal to genuinely address the concerns voiced by civil society last month, confirm that the Commission is ready to push for this unacceptable model17. If adopted as is, the regulation would turn Internet access providers into the Internet's gatekeepers, breaking the historic model of growth and innovation that has worked so well for the past two decades, as well as the egalitarian platform of free communications we know today.

In the coming days, the European Commission will make public the draft regulation. Citizens as well as policy-makers must vigorously oppose Neelie Kroes' plan, and instead adopt a meaningful protection of Net neutrality against the risk of corporate capture and rent-seeking business-models. In particular, lawmakers should amend the text to explicitly ban prioritization of Internet services. The future of the Internet is at stake.