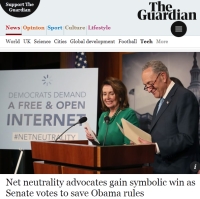 But the resolution also requires passage by the Republican-controlled House and Donald Trump’s signature to be enacted – an unlikely outcome before the Federal Communications Commission’s repeal of net neutrality rules goes into effect next month.

Deemed “the most important vote for the internet in the history of the US Senate” by author Senator Ed Markey, a Democrat from Massachusetts, the resolution would reverse the FCC’s December 2017 repeal of net neutrality rules that were put in place in 2015. [...]