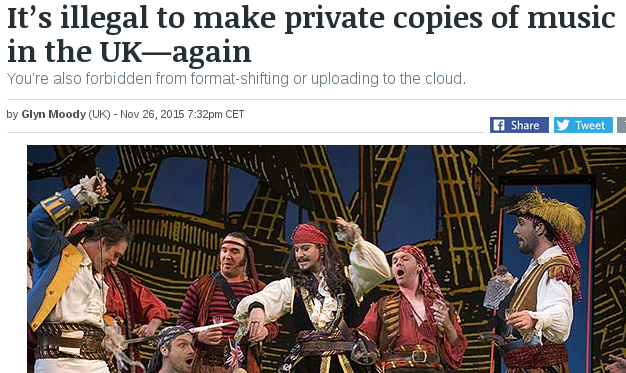 You're also forbidden from format-shifting or uploading to the cloud. [...]

The UK's new private copying exception had been in a state of legal limbo following a judicial review of the legislation in June, which had been sought by the British Academy of Songwriters, Composers and Authors, the Musicians’ Union, and UK Music. In his review, the High Court judge mostly found in favour of the UK government, except for one crucial aspect. He said the UK government's decision to bring in the new copyright exception was "flawed" because "the evidence relied upon to justify the conclusion about harm was inadequate/manifestly inadequate." [...]

In other words, killing the personal copying exception will bring the music industry very little financial benefit, while turning the UK public into scofflaws for making backup copies, format-shifting or uploading music to the cloud. And as The 1709 Blog points out, it's not as if the music industry is going to use the fact that the exception has been withdrawn to pursue anyone caught doing any of these things: "I think it is fair to say that they will, privately, continue with their old policy of not seeking to sue or prosecute anyone for personal format shifting. To do otherwise would undoubtedly alienate the buying public and strengthen the argument that the record labels are out of touch with what music fans want." [...]