Though non-binding, the opinion hands a victory to digital rights groups, parents and teachers’ unions that opposed the experiment. [...]

France is poised to become the first European country to use facial recognition technology to give citizens a secure digital identity — whether they want it or not. [...]

European Digital Rights (EDRi), together with 45 NGOs, academics and companies across 15 countries, has sent an open letter to European policymakers and regulators, warning about widespread and potentially growing use of deep packet inspection (DPI) by internet service providers (ISPs). [...]

Today 45 NGOs, Academics and Companies from 15 countries released an open letter outlining the dangers of the wide-spread use of privacy invasive Deep Packet Inspection technology in the European Union. The letter is referencing the ongoing negotiations about Europes new net neutrality rules in which some telecom regulators are pushing for the legalization of DPI technology. [...]

Open Letter to the EU [EDRi].

[TheAtlantic] Why Surveillance Is the Climate Change of the Internet

The Atlantic podcast Crazy/Genius returns to explain how privacy became the most important idea on the internet—and why it’s still so confusing. [...]

“I think privacy is the wrong way to describe the issue we face in a world of pervasive unregulated data collection,” says Julia Angwin, a longtime investigative reporter. She prefers another term: data pollution.

[NBCNews] Millions of people uploaded photos to the Ever app. Then the company used them to develop facial recognition tools

What isn’t obvious on Ever’s website or app — except for a brief reference that was added to the privacy policy after NBC News reached out to the company in April — is that the photos people share are used to train the company’s facial recognition system, and that Ever then offers to sell that technology to private companies, law enforcement and the military.

In other words, what began in 2013 as another cloud storage app has pivoted toward a far more lucrative business known as Ever AI — without telling the app’s millions of users. [...]

Ever since plans to create this shared biometrics database have been made public last year, privacy advocates have criticized the EU, calling CIR's creation as the "point of no return" in creating "a Big Brother centralised EU state database."

[PJMedia] Google Reveals Plans to Monitor Our Moods, Our Movements, and Our Children's Behavior at Home

Patents recently issued to Google provide a window into their development activities. While it’s no guarantee of a future product, it is a sure indication of what’s of interest to them. What we’ve given up in privacy to Google, Facebook, and others thus far is minuscule compared to what is coming if these companies get their way.

Microsoft broke Euro privacy rules by carrying out the "large scale and covert" gathering of private data through its Office apps.

That's according to a report out this month [PDF] that was commissioned by the Dutch government into how information handled by 300,000 of its workers was processed by Microsoft's Office ProPlus suite. This software is installed on PCs and connects to Office 365 servers.

Documents alleged to contain revelations on data and privacy controls that led to Cambridge Analytica scandal.

Parliament has used its legal powers to seize internal Facebook documents in an extraordinary attempt to hold the US social media giant to account after chief executive Mark Zuckerberg repeatedly refused to answer MPs’ questions.

[MotherBoard] Targeted Advertising Is Ruining the Internet and Breaking the World

Surveillance capitalism and targeted advertising have become the norm on the internet, and it's hurting all of us.

Millions of people face the prospect of being scanned by police facial recognition technology that has sparked human rights concerns.

The controversial software, which officers use to identify suspects, has been found to be “staggeringly inaccurate”, while campaigners have branded its use a violation of privacy. [...] 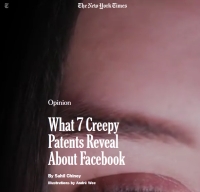 A review of hundreds of Facebook’s patent applications reveals that the company has considered tracking almost every aspect of its users’ lives: where you are, who you spend time with, whether you’re in a romantic relationship, which brands and politicians you’re talking about. The company has even attempted to patent a method for predicting when your friends will die.