[Wired] Senate Votes to Save Net Neutrality, but Hurdles Remain 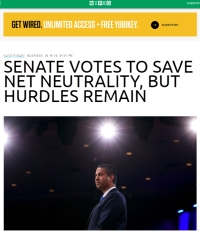 The Senate Wednesday voted to preserve net neutrality, with three Republicans joining all of the chamber’s Democrats and independents to block a Federal Communications Commission plan to undo Obama-era rules governing the internet. The vote is a major victory for net neutrality activists, but the plan still has a long way to go before it could take effect. [...]

The proposal passed narrowly in the Senate, where activists only needed to win over two Republicans. In the House, they'll have to woo more than 20 Republicans, even with unanimous Democratic support. Meanwhile, the White House has expressed support for FCC chair Ajit Pai's decision to reverse the Obama-era rules, and Trump denounced net neutrality in a 2014 tweet. It's a longshot, but it's not quite impossible. Trump is known to change his mind from time to time, and House Republicans could decide that voting against net neutrality would be politically problematic. [...]