From bad to worse: the del Castillo Report on the European Electronic Communication Code

Paris, 22 March 2017 — The rapporteur for the European Parliament on the European Electronic Communication Code intends to make Europe retreat from the way to a free, developed, fair digital society.

To understand what it's about, let's step back a little.

Since 2002, the regulation of telecommunication has been based on a group of European directives called "the telecom package". The second revision of this package (the first was in 2009) began in September 2016 with the publication by the European Commission of a draft bill for a European Code of Electronic Communication. This massive bill of more than a hundred articles aims to recast and reform the current telecom package. It is now being negotiated at the Council of the European Union, and a report just had been published at the European Parliament. This report published by the MEP Pilar del Castillo (ES - EPP) will be discussed in the coming months. 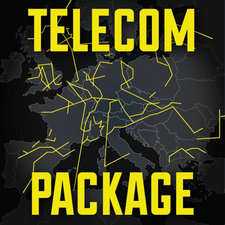 Our work on Telecom Package on the wiki

The bill of the Commission, a bill for a Telecoms oligarchy

We support the Commission' stated objective: to offer very high speed connectivity, based on optical fibre, to all European citizens. That is obvious. However, we discuss how to arrive there. The Commission's bill is a bill for oligopolies, a bill for the big ones, the three or four large operators in each country, a bill at the expense of the small ones. We knew that this Commission couldn't come up with a bill favorable for citizens. That is probably what, at the last minute, convinced it to assemble into the communication, a collection of policies called "WIFI4EU", as a last outburst before entirely forgetting citizens. As if Wi-Fi were no more than an issue of money, dribbled from the fingers like a handout, and not a set of liberties to conquer.

In the Commission's bill, citizens are not equal before the law. The Universal Service Obligation designed by the Commission makes persons geographically isolated or in difficult situations into second-class citizens. While "mainstream" citizens will benefit from very high-speed Internet access, those benefiting from "Universal Service" will have only "functional" access worthy of the ancient Minitel of 30 years ago. In brief, for city-dwellers the very high-speed digital society, for rural citizens the leftover scraps of a two-speed economy.

Networks are today a common good. Even according to the French national electronic communication regulator Arcep, networks are "an infrastructure of liberty". The Commission is neglecting that when it closes the door of the telecoms market to all the small actors who could build and nourish the wealth of telecommunications.

This restrictive closure of the market is tangible in many ways.

Opposed to the demands of European Community Networks, the Commission favored powerful operators substantially by completely deregulating investment in the as-yet undefined new network elements. It was the same when it proposed not to regulate the structurally separated operators. The Commission also handed operators a beautiful gift by offering them individual rights to radio frequencies for 25 years while counting on the secondary frequency market to keep it all working. Once again this flies in the face of history, because today Wi-Fi, and thus free frequencies, transmit more data than all other technologies combined.

But in this fight for the open spectrum, the Commission has defended the sharing of radio frequencies since 2012, and in this text has made a number of proposals in favor of the sharing of radio frequencies in the draft code. Maybe in good faith, but without taking care to establish a coherent and readable framework for the open spectrum, too sure to be swallowed by the Member States.

Those are a few illustrations of the slippery slope on which the Commission places itself against citizens, against the digital society, against innovation. But that is nothing compared to what the rapporteur, MEP Pilar del Castillo, foresees for this recast of telecoms law in Europe.

The "del Castillo" report, a report for private monopolies (i.e the nightmare)

Pilar del Castillo is no stranger to us. She never fails to place her portfolio of responsibilities at the service of the industry: an industry with which she cultivates privileged relations and to which she offers the most beautiful presents. Her report on the Code is one of them.

Determined in her quest for European breakage, Mrs del Castillo doesn't hesitate to dig deeper the gap opened by the Commission. European regulation must not merely be written for an oligarchy, it must be made for a monopoly. But not any old type of monopoly. The public monopolies which Europe has fought against when they were State property, the rapporteur now plans to give to private companies -- the incumbent operators, those now-privatised former monopolies.

To this end, the regulatory shortcomings explained above are extended and made more vague. The control of the regulator is reduced and traded off for more or less fair development. The idea that the optic fibre and a high speed symmetrical broadband are supposed to be objectives, is simply put rewritten to a mere placebo for copper networks. And, of course, no progress on what we could expect from a representative of the European people.

But where the intervention of the MEP is even worst, it is regarding the spectrum. The minimum of 25 years rights on public domain radio frequencies, has been extended to 30 years! 30 years. Here is what will block European economy, here is what will build fortresses around the kings of the digital economy, those incumbent operators re monopolising. And let's not forget the total lack of possibility of interventions on the rights to use the spectrum given to those operators. Finally, because the benefits of the biggest will be pale into insignificance if they were not associated with the privation of the smallest, the unstable provisions by the Commission in favor of the open spectrum are literally eradicated by the rapporteur. Do not think about sharing. Do not think about innovation. Mostly, do not think especially about freedom.

On the ruins of the Telecoms in the making, the only positive provision of this report is the suppression of the administrative fees for the small operators... There is always a small gift for those left behind.