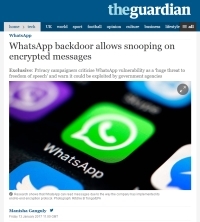 Privacy campaigners said the vulnerability is a “huge threat to freedom of speech” and warned it can be used by government agencies to snoop on users who believe their messages to be secure. WhatsApp has made privacy and security a primary selling point, and has become a go to communications tool of activists, dissidents and diplomats. [...]

The security backdoor was discovered by Tobias Boelter, a cryptography and security researcher at the University of California, Berkeley. He told the Guardian: “If WhatsApp is asked by a government agency to disclose its messaging records, it can effectively grant access due to the change in keys.” [...]

Professor Kirstie Ball, co-director and founder of the Centre for Research into Information, Surveillance and Privacy, called the existence of a backdoor within WhatsApp’s encryption “a gold mine for security agencies” and “a huge betrayal of user trust”. She added: “It is a huge threat to freedom of speech, for it to be able to look at what you’re saying if it wants to. Consumers will say, I’ve got nothing to hide, but you don’t know what information is looked for and what connections are being made.” [...]