Paris, 22 May 2017 — As the EU Council, the European Parliament and the European Commission enter the dark rooms of trialogues on the WIFI4EU draft regulation, European community networks and the open-wifi community wanted to remind them of the importance of the inclusion of all actors in the development of local connectivity.

Object: WIFI4EU — EU must promote diversity in the telecom sector and resist the commodification of publicly-funded networks

Delegations of Members of the EU Parliament are currently finalising trialogue negotiations on the WIFI4EU draft regulation. The regulation will allow local authorities to open WiFI hotspots to boost Internet access, particularly in underserved communities.

WIFI4EU is an initiative announced last year by President Juncker in his "State of the Union" speech in Strasbourg. To deliver on this promise "to equip every European village and every city with free wireless Internet ac­cess around the main centres of public life by 2020", the EU will unleash 120 million between by 2017-2019 to roll out WiFi hotspots in at least 6,000 to 8,000 local communities.

But as the trialogue draw to a close, there is a huge risk of seeing this laudable initiative miss the opportunity of fostering diversity in the telecom sector as well as human rights. Recent negotiations show that Member State governments seek to keep small and local access providers out of the scheme, favouring incumbent multinational corporations while allowing them to spy on users' communications.

To overcome these risks, we call on the EU Council and the EU Commission to endorse the constructive proposals put forward by the European Parliament, and ask that the letter stand firm to safeguard the public interest in EU telecom policies.

In recital 4 of the regulation, the European Parliament insists on the involvement of organisations such as "not-for-profit cooperatives" and "community centres" as entities that could offer wireless connectivity. In the same vein, at recital 9b, the EP wants to promote local SMEs and not-for profit actors as key beneficiary for the procurement and installation of equipment 1. Such language ensures that small, local actors — including for-profit SMEs as well as many non-profit community networks — will be eligible to WIFI4EU funds. By directing the funds to these small but competent players, WIFI4EU would promote local employment, spread of technical skills as well as diversity in the telecom sector, rather than favouring already dominant players in the industry. This is all the more shocking considering that many non-profit community networks are already rolling out the kind open wireless networks promoted by WIFI4EU, with little or no public support. By directing EU funds to these actors when possible, WIFI4EU has the potential of helping them grow and expand their activities at the local level. Unfortunately, the EU Council is trying to remove these recitals arguing that they lack any legal basis, and paving the way for dominant actors to reap most of WIFI4EU subsidies. 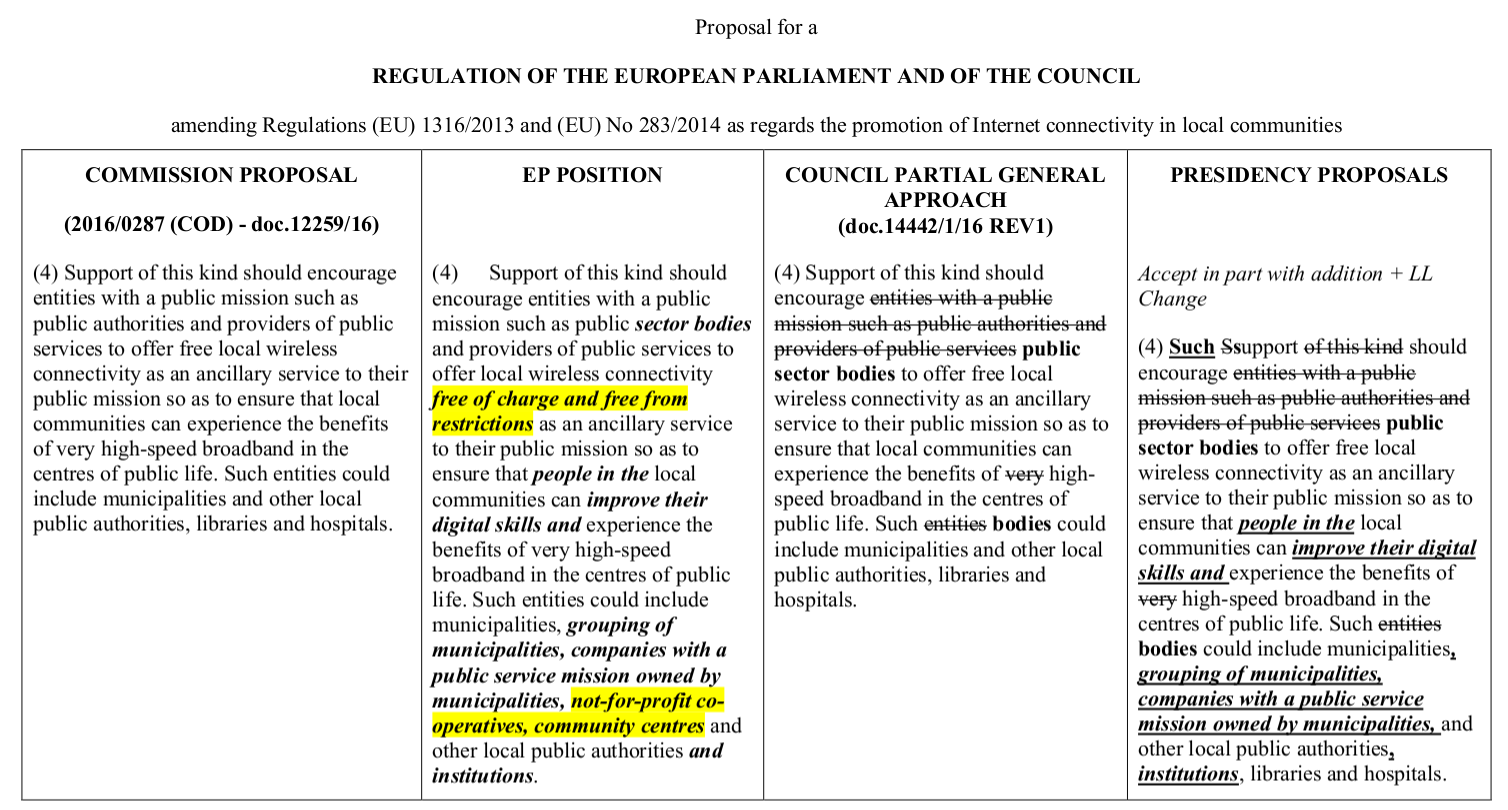 Protecting the right to privacy by renouncing to prior authentication

In recital 2, both the EU Parliament and EU Council are promoting a solution for a single authentication system that can be used across the EU. This solution favouring authentication system to regulate access to "open" networks is not backed by any substantial reasoning, and runs counter to human rights. We understand the co-legislators' goal of making access to these public networks as easy as possible for people travelling across the EU, but the most simple way to do so is to ensure these are, indeed, open networks without authentication. If the goal of having an authentication system is to prevent illegal activities, co-legislators should be reminded that Advocate General of the CJEU recently explained in the case C‑484/14 (McFadden) that imposing on Wi-Fi network operators an obligation “to identify users and to retain their data” would be “clearly disproportionate” as it “would not in itself be effective (...) in preventing specific infringements”. In the final ruling, the Court agreed that such an obligation should only be imposed after a specific targetting injunction requiring a WiFi operator to do so. To minimise privacy risks associated with data retention and foster ease of use, WIFI4EU should not promote authentication systems in what are meant to be open and free access points. 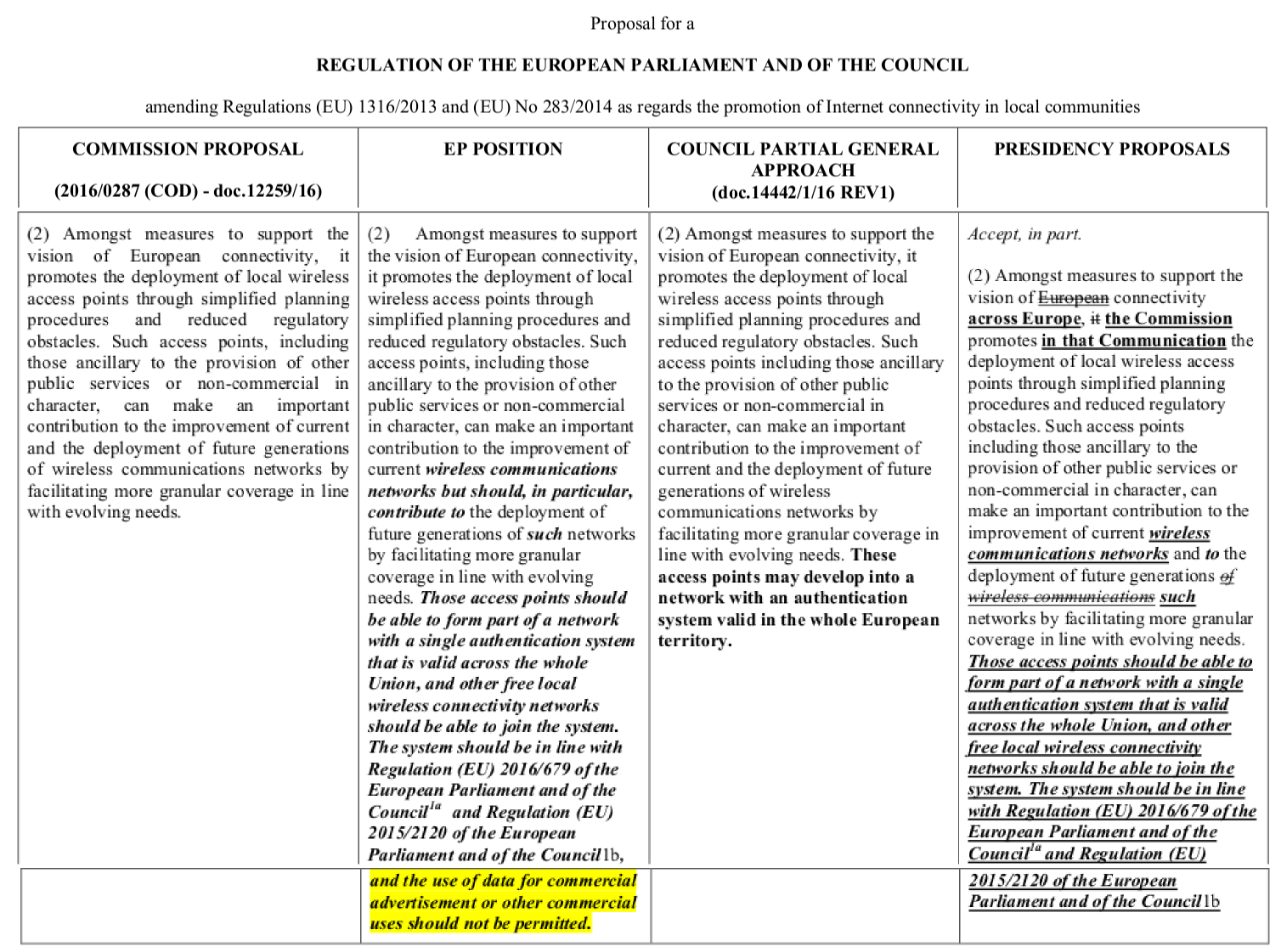 Keeping advertising and commercial surveillance out of public wireless networks

WIFI4EU should not commodify publicly-funded services by allowing advertising schemes enabled by commercial surveillance. Unfortunately, the Council is trying to undermine the protection suggested by the EP in recital 2, which precludes the use of traffic data for advertisement purposes or other commercial uses. The EP and Council must keep the EP version to be fully in line with the data protection framework and the EU Charter of Fundamental Rights. Furthermore, commercial use of data cannot be justified within an implementation of public utilities —especially when funded through public money.

Offering free, open and neutral access to those who need it the most

The number one priority for WIFI4EU must be to develop open and free wireless networks that boost Internet access in underserved communities. The Council's proposal to delete the policy objective of "preventing remote locations and rural areas from lagging behind" and of making these publicly-funded networks both "free of charge and free from restrictions" is dangerous. It suggests that WIFI4EU networks might not be free, nor open, nor even respect the Net neutrality principle enshrined in the EU regulation on the telecom single market. The language put forth by the EU Parliament must be upheld. 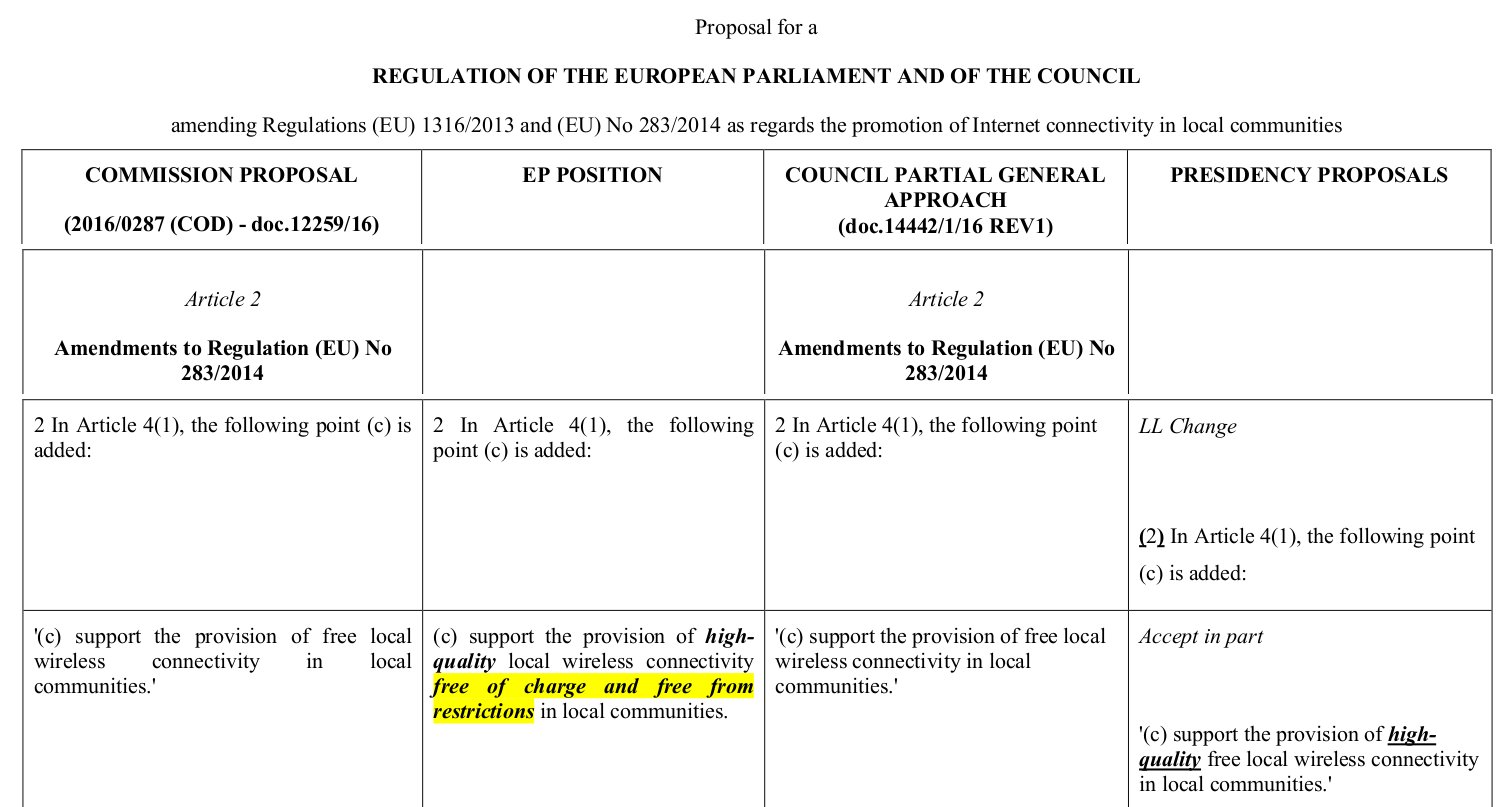 We count on you to ensure that the proposals of the EU Parliament, which serves the general interest and specific goals of EU broadband policy, are safeguarded in the final text.